Đổi trò chơiThe World Bank (WB) has conducted surveys on the impact of Covid-19 on families in Vietnam. They sought information about family incomes, job status and the ability to access government support. 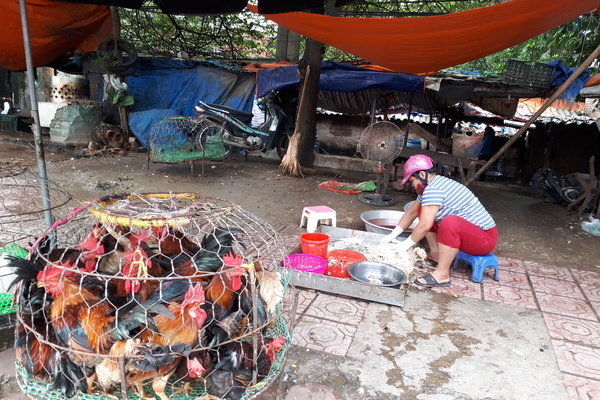 Đổi trò chơiDuring the second survey, WB carried out interviews via phones with nearly 4,000 households throughout the country from July 27 to August 12, which coincided with the second Covid-19 breakout.

WB found that one third of households had incomes lower than the previous month. Meanwhile, the figure was 70 percent in the previous survey, which indicates that Vietnam’s economy has shown signs of recovery.

Đổi trò chơiHowever, though the number of families with lower income decreased, the living conditions of more than half of families were still lower compared with 2019.

More than half of families said their incomes decreased in the previous month compared with the same period last year.

The existence of some households that still have lower living conditions despite economic recovery showed that some elements of the economy bear a bigger impact from the pandemic.

Nearly all business households said their incomes had declined compared with 2019.

Đổi trò chơiAccording to WB, most household-run businesses still operate but some face difficulties. The number of household businesses which stopped operation also increased during the second-round survey (June/July).

The number of operational businesses decreased from 95 percent in May/June (first round) to 90 percent in June/July.

Some analysts warned that many businesses that are temporarily suspending operation may shut down permanently.

The government launched the first economic support package in March/April. However, the implementation of the policy has been going slowly, which explains why the effect of the package on people and businesses remains modest.

WB pointed out that the people’s capability of accessing support packages is low. Of 13 percent of households applying for support in February, only 2.3 percent received support in July/August.

Meanwhile, a large-scale survey by the General Statistics Office (GSO) found that less than 18 percent of businesses accessed the support package.

The Vietnam Institute for Economic and Policy Research (VEPR), in its Q3 macroeconomic report, said that the number of businesses enjoying support was inconsiderable, because many businesses fulfilled their tax duties before the decision on the payment extension was released.

Meanwhile, many businesses complain that they have to fulfill costly and complicated procedures to be able to access the support source.

Đổi trò chơiVEPR Chief Economist Pham The Anh stressed that social security policies still need to be put as a top priority, and the support needs to be delivered quickly and to the appropriate subjects before people fall into tragedy.

Đổi trò chơiAnh went on to say that when implementing the policies, it is necessary to pay higher attention to workers in the non-official sector as they account for a large proportion of workers, most of whom are vulnerable, and are affected most in the crisis and have difficulty accessing support.

Meanwhile, policies on supporting businesses also need to be implemented quickly and should be addressed to the appropriate subjects to satisfy the needs of businesses.

While affirming that many people are still in difficulty because of Covid-19, Anh said that the government does not need to launch a second support package.

Đổi trò chơiHe said that if the first package has not been fully disbursed, another package is not necessary at this moment. The second package, if launched, will only weigh on the state budget rather than creating positive influences in the economy and society.

Vo Tri Thanh, a respected economist, disagreed with Anh. Thanh said at the 2021 Economic Forum held some days ago that in the context of the Covid-19 recurrence in the summer, Vietnam needs to launch new economic stimulus policies, including the second support package.

“The most important thing is that the packages must be implemented in a quick and transparent way,” Thanh said.

The aim of the package is to minimize difficulties for enterprises and create a premise for businesses to continue to develop sustainably.

Đổi trò chơiHowever, while affirming that the government’s support plays a very important role in recovering the economy, Thanh said the efforts by businesses themselves will play the decisive role.

“This is an opportunity to challenge the Vietnamese staff,” Thanh said.

.
The turning points in the lives of Vietnamese billionaires
FEATUREicon  28/11/2020

Once dreaming of becoming a university lecturer, Nguyen Thi Phuong Thao finally became a businesswoman and billionaire. Others became billionaires though they did not complete or even attend university.

Vietnam now has a new opportunity to develop its automobile industry. If the chance is missed, the country will become an automobile import market.

The new regulation that clients’ information will be shared by 30 commercial banks with taxation bodies has stirred up the public. People fear that their bank account information may be leaked.

After a record-high growth rate in January, Vietnam’s tourism industry has fallen into a crisis caused by Covid-19.

Đổi trò chơiA researcher on renewable energy, Dr Vo Viet Cuong, from the Electrical and Electronic Engineering Faculty under the HCM City University of Technology and Education, has noted that there is no absolutely clean energy.

Talented people are available at any time, talent is everywhere, but the number of talented persons is often limited.

Đổi trò chơiThere were many things the married couple planned to do when they were united, but these never happened because of an accident that killed the husband.

Đổi trò chơiAn eel farm of an older man brings turnover of nearly VND10 billion a year, and 99 percent orders are online. Another farmer sold 26 tons of rambutan by contract after putting goods on online sale.

While many Vietnamese find their way to developed countries to make a living, many European and American businesspeople consider Vietnam, particularly Da Lat, a good land.

Đổi trò chơiThe competition in the beer market is no longer healthy as 'dirty tricks' have been used to win over rivals and obtain market share.

Đổi trò chơiThe growth of domestic firms, especially private ones, is expected to cause a significant qualitative change in FDI and export attraction.

Đổi trò chơiThe national airline of Vietnam finally saw "the light at the end of the tunnel" when the National Assembly agreed with the Government's proposal for solutions to help Vietnam Airlines overcome difficulties caused by the Covid-19 pandemic.

Most of the components used to make solar panels are recyclable. Expired solar panels will not be a danger if there are reasonable regulations and good technologies.