Signatories of the Regional Comprehensive Economic Partnership (RCEP) Agreement affirmed its significance to each country’s economy and regional trade-investment activities following the signing of the pact on November 15. 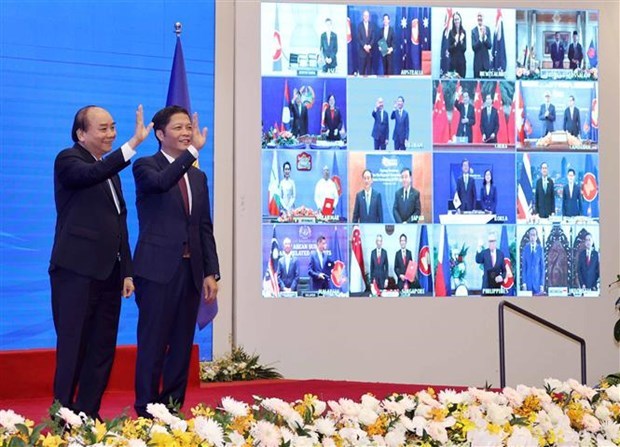 The same day, addressing the virtual 4th RCEP Summit hosted by Vietnam, Chinese Premier Li Keqiang said that the inking of the RCEP is not only a breakthrough achievement in East Asia cooperation, but also a victory of multilateralism and free trade.

Đổi trò chơiDr Jeffrey Wilson, a Research Director at the Perth USAsia Centre in Australia, noted that the RCEP will be the most important regional trade agreement ever signed and projected to change the region’s economic and strategic maps.

Đổi trò chơiMeanwhile, Malaysian Prime Minister Muhyiddin Yassin was quoted by the Malaysian News Agency (Bernama) as saying that the RCEP will serve as an important instrument for economic recovery, and will encourage the reopening of markets while ensuring uninterrupted supply chains.

Đổi trò chơiAddressing the 4th RCEP Summit, Muhyiddin said the RCEP agreement is critical for the region’s response in tackling the COVID-19 pandemic, which has not only cost lives but has also battered economies.

Coupled with the challenges to the global trading system due to regional tensions, it is imperative for ASEAN to continue to sustain competitiveness as a region, the PM stressed.

According to the Malaysian leader, Free Trade Agreements (FTAs) are the way forward to help sustain competitiveness through promotion of international trade, encouraging investments and ensuring supply of talent.

As such, the RCEP will be the main vehicle through which regional economic integration within ASEAN and its dialogue partners can be enhanced.

The PM went on to say that it is indeed significant that this partnership has been negotiated based on the different levels of economic development of the 15 participating countries, to ensure a mutually beneficial FTA for all.

Đổi trò chơiHe is of the view that this is the touchstone for the future growth and vibrancy of the regional economic collaboration.

Malaysia, together with ASEAN and FTA partners, would want to demonstrate to the world that even with varying levels of economic development, 15 countries can come together to create a trade pact that will be mutually beneficial, not only for the business community, but also for the people’s livelihood, the PM noted.

On another note, Muhyiddin said Malaysia recognises the difficulties India is currently facing, and wishes to express its continuous support and welcome India’s accession to the RCEP in the future.

The RCEP involves 10 members of the Association of Southeast Asian Nations (ASEAN) as well as the RoK, China, Japan, Australia and New Zealand, and their combined gross domestic product accounts for a third of the world's total.

Đổi trò chơiVietnamese businesses should prepare to export their products to other ASEAN countries ahead of the possible signing of the Regional Comprehensive Economic Partnership (RCEP) this week.

A liaison board for the Vietnamese community in Bangladesh has made its debut.

The Association of Vietnamese in Macau debuted at a virtual ceremony organised by the Vietnamese Consulate General for Hong Kong and Macau on November 8.

Đổi trò chơiThe annual Vietnam Festival in Japan opened in Tokyo on November 7, making it the first large-scale event here since the city was included in the Japanese Government’s Go To Travel campaign.

Đổi trò chơiEngineer Trinh Tan, Chairman of the Vietnamese Association in North Morava and Ostrava, has been awarded with the first-class Order of national service of the Czech Republic State.

Đổi trò chơiThe conversation.com reported that Europe could look to the success of countries like Vietnam as the continent is again in the grip of a COVID-19 resurgence.

A photo exhibition entitled “Vietnamese communal house” was opened in Berlin on October 8, featuring the unique architecture of ancient village communal houses through the lens of architect-photographer Tran Trung Hieu.

A statue of late Vietnamese President Ho Chi Minh will be erected in Vyborg town, Russia’s Saint Petersburg city, as a stone marking the statue’s location was placed at a ceremony on October 8.

Gheorghe Nica, 43, accused of manslaughter over the deaths of 39 Vietnamese migrants whose bodies were discovered in the back of a lorry near London, the UK, last year, pleaded guilty to an immigration offence on October 7.

The 29th WorldFood Moscow international trade fair for food and beverages has been held in the Russian capital.

Đổi trò chơiThe documentary centre of the Russian News Agency TASS has a huge collection of photos taken over the course of a century, including those showing the country’s relations with other countries.

Đổi trò chơiA Vietnamese language course for the 2020-2021 academic year was recently opened for children of Vietnamese people in the North Moravia region of the Czech Republic.

Đổi trò chơiThe Vietnamese Embassy in Romania held a photo exhibition in Bucharest on September 18 to introduce the history, people and nation of Vietnam.

The Ministry of Education and Training and the Ministry of Foreign Affairs launched a contest on compiling Vietnamese-language books and documents for overseas Vietnamese, at a ceremony in Hanoi on September 16.

Đổi trò chơiHuong Viet, an online magazine of the Vietnamese community in Germany, on September 12 joined a multicultural festival in Augsburg in the southern state of Bayern,

Đổi trò chơiThe Nguyen Du Lao-Vietnamese bilingual school launched its 2020-2021 school year at a ceremony in the Lao capital of Vientiane on September 11.

Đổi trò chơiInterior lacquer artworks which come from the Vietnamese traditional lacquer village of Ha Thai have been introduced to participants at Paris Design Week which is currently being held in France from September 3 to September 12.